Collar or no collar

Phoebe and Ruby (my Mum and daughter rotties) we playing and wrestling on my yard as normal. They spend so much time wrapped around each other.

The noise changed to a scream.

I looked out and thought at first they were fighting but no, poor Ruby had got her leg through Phoebe's collar. The more she twisted and thrashed around, screaming the tighter it got around Phoebe's neck. Poor Phoebe's eyes were rolling and she just didn't know what to do.
Ruby was clearly in huge amount of pain and was biting at anyone including my arm (I, thankfully had a thick jacket on)

We managed to release  her by cutting the leather collar off with a stanley knife which wasn't easy as by now it was cutting into Phoebe's skin.

I was convinced Ruby would be off to the vets for repair of a broken leg but NO, once free she ran after our cat.
Phoebe was frightened and ran to the bottom of the yard and it took her a while to come to me 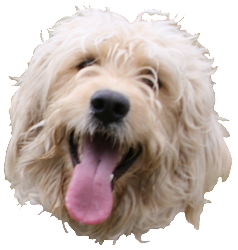